Reasons for wanting to adventure

Sit down crossed legged in an area with rocks (inside or outside) the closer I am to the mountains the more connected I feel. Lay down a dagger (any weapon will do) and spend 10 minutes analysing the weapon and its weight, feel and sharpness. Then I take the whetstone and slowly start to sharpen it over a period of 10 minutes the speed of sharpening quickens to the point that it becomes a blur. After this time I then take the oil soaked leather cloth and rub down the weapon. At first I start fast and towards the end of the ritual these movements are almost imperceptible. At the conclusion of the ritual I stand up and carefully place the weapon away.

Unusually for an Obsidimen brotherhood both elders where killed around the same time as each other. This caused all of my brothers to return to the life rock and begin the ritual to bestow eldership on the two eldest of our brotherhood. This situation rarely happens if ever and for an attack from horrors to have happened at the same time could have been coincidental, but I have a deep suspicion the death of the previous elders was orchestrated and the attack planned.

Due to this unusual situation I had only completed 10 years of the standard 20 years of my wandering after my first awakening. As a consequence I am missing vital experience of the knowledge gained during my 100 years in an awakening state and do not fully know my own True Name. Although I obviously do have a true name I feel there is some part missing. Hence, whenever I see Obsidimen I am always curious and want to gain further insights in to my own existence. I also have a strong desire to enter into a dreaming state, but for reasons unknown to me I also fear it. I speculate that this fear is brought about from the fact that I feel I am cursed, not necessarily horror marked. I feel that who or whatever corrupted my living rock is still out there and connecting with other Obsidimen could cause similar disasters.

The battle had been on-going for two strenuous days and my brothers were starting to tire with nearly half of them already slain, the onslaught was relentless. At this time a Troll Clan called “Dark Slayers” of 300 or more, happened upon the carnage and became embroiled in the fight. During the battle, which lasted for a further three days, all of my brotherhood where slain along with more than half of the Troll Clan. As the last Obsidimen fell the remaining horrors vanished as quickly as they had appeared. Why was I spared? To this day I have no answer to that question but if it takes 1000 years to find out whom or what committed this act, I will avenge my lost brothers. Feeling immense loss and confusion I decided to meld with my life rock but at that moment a Troll Nethermancer named Tharagon stopped me. Shouting…

“Stop! To meld with that now will corrupt you forever, as your life rock has now been corrupted, by some powerful horror of which I cannot discern.”

After some time of asking questions of Tharagon he eventually ask if I would join there Clan and if I did he would help determine who or what had corrupted my life rock. Deciding this was probably the best course for me to take at this time I joined the Troll Clan. Before leaving, I chipped away a small piece of amethyst from the life rock and have made this in to a life stone necklace. Tharagon wasn’t as happy with this, he expressed that it would be corrupted and as such would enable who had performed this act to be able to find me as if I was Horror Marked. Good I thought if I can’t find this fiend then I hope one day it finds me and then I’ll have my revenge.

I stayed with this Troll Clan for many years living in the Scytha Mountains. During this time I was taught in the ways of a Horror Stalker, although I had more of a passion to be a Nethermancer, but Tharagon insisted this would be the best route for me to take presently and if I survived long enough to become a Nethermancer at a later date. I continued to study the ways of a Horror Stalker and grew very fond of Tharagon and struck up a great friendship with him during my years with the Troll Clan.

Most of my time was spent studding and occasionally I was invited to go out with a party of Trolls exploring old unopened kaers and slaughtering any horrors we came across. I continued in this vein for many years and my excursions slowly increased. However, after a while it became somewhat unsettling when I started to realise that this Troll Clan was more interested in destroying horrors and collecting the loot rather than helping others. This eventually culminated in me fleeing for my life from the Troll Clan.

Travelling through the Scytha Mountains one day, we happened upon a small village containing three families who complained of being attacked in the night by flying horrors. They pleaded with the Troll Clan for help, who at first appeared understanding and agreed to rid the village of their nightmares. After a successful night battling what I now know to have been Nightwist’s the Troll Clan then asked for their reward which was promptly handed over. This however didn’t satisfy the Troll Clan who then set about ransacking the village of all their possessions and killing two farmers in the process. I appealed to my companions to stop, whom I had once called friends, only then to be set upon. During the ensuing melee I took down one of the Trolls and barley escaped with my life. If it wasn’t for the kindness of Tharagon using his trickery in distracting the Trolls with a spell or two, I doubt I would have made it out alive.

Finding myself now completely alone with no friends, no brothers and no life rock calling me I travelled aimlessly for many years. During this time I had no contact with any name givers and felt completely alone in this world. I fell in to a dreaming state for an unknown length of time, but during this time I started to reconnect with my other brothers (not from my life rock) and started to gain a feeling that all was not lost. Eventually I resolved myself to avenge my brothers and use the skills that the Trolls had taught me and try and discover who or what had killed them, and eventually to rid my life rock of its corruption.

With this new resolve I headed to the largest civilised town “Bartertown” to seek out like minded adventures, preferably a group containing a Nethermancer. I have only one condition for the group I join none of them are Trolls, unless it’s a Nethermancer. 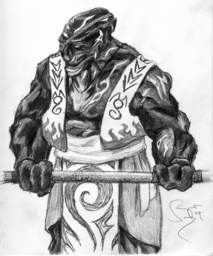